I have written a lot about Venice lately and it’s probably no surprise when I say that I simply fell in love with this beautiful city.

Venice doesn’t need any type of introduction thanks to its notoriety and to all the things this city has to offer. Leaving aside the amazing scenery embellished with canals, bridges and gondolas, Venice means much more. 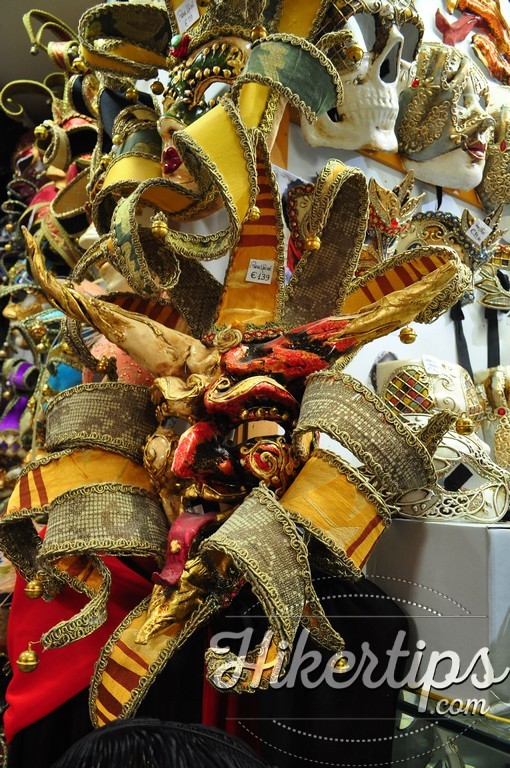 On this note, I would like to talk about my favorite 10 places in Venice, which I consider emblematic for this charming city.

1.St. Mark’s Basilica (Basilica di San Marco) is a famous cathedral in Venice which rises majestically in the square with the same name. This cathedral is a real architectural masterpiece, which combines the Byzantine and the Italian styles. Its opulent design displays an interesting blend between columns, arches, spires and sculptures. 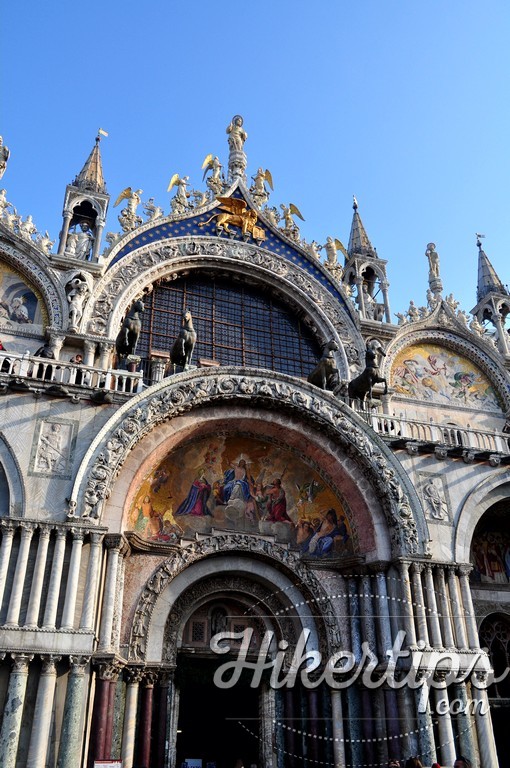 Also named the Church of Gold (Chiesa d’Oro), St. Mark’s Basilica was considered a symbol of the Venetian wealth and power, showing the greatness of the city. Situated next to the Doge’s Palace, the cathedral used to serve as a chapel for the famous Doges of Venice.

It is a real delight to stop in the middle of the square which is always full of pigeons and admire the image of this imposing cathedral.

2.The Doge’s Palace (Palazzo Ducale) which is also situated in St. Mark’s Square, was the residence of the Doges of Venice. The Doges were the chief magistrates and leaders of the city during the Middle Ages and the Renaissance. 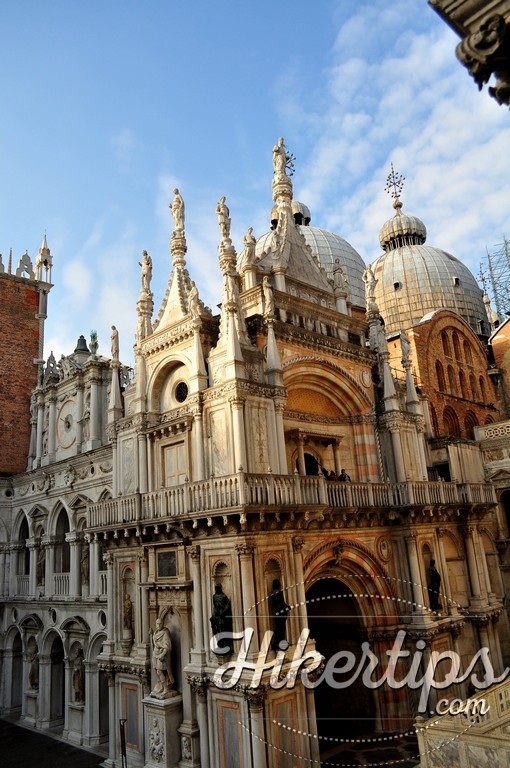 You should definitely visit this palace in case you want to admire the Opera Museum, the courtyard, the Loggias, the Doges’ apartments, the institutional chambers, the prisons or the armory. This will be an interesting experience which will offer you the chance to find out a lot of details about the history and the culture of Venice.

3.As the name suggests, St. Mark’s Clock Tower (Torre Dell’Orologio) is situated in the same square. Considered another symbol of wealth and glory, the clock tower is positioned between two lower buildings which are practically glued to each side of the tower. 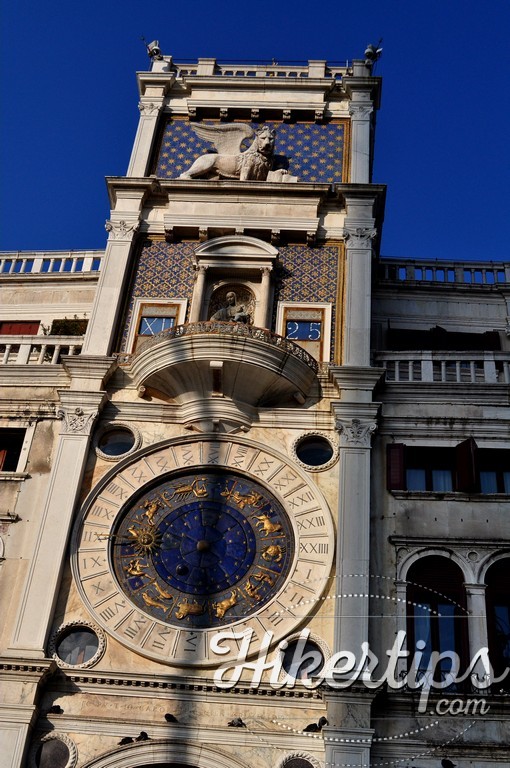 The tower includes a terrace situated close to the top where the tourists can admire two interesting bronze figures, known as the Virgin and the Child. The clock face shows the time, the zodiac signs and the current phase of the moon. St. Mark’s Clock Tower seems to perfectly complete the entire scenery.

4.If you reach St. Mark’s Square, you have no chance to miss St. Mark’s Campanile (Campanile di San Marco), which is the bell tower of the famous St. Mark’s Basilica. This 99 meter tall tower is considered the tallest building in Venice and it goes without saying that it’s also a Venetian symbol.

The belfry of the tower has an interesting bell, even if it used to have five different bells. There is a lodge above the belfry which has the shape of a cube and which gives the tourists the chance to admire a spectacular view over the entire city. 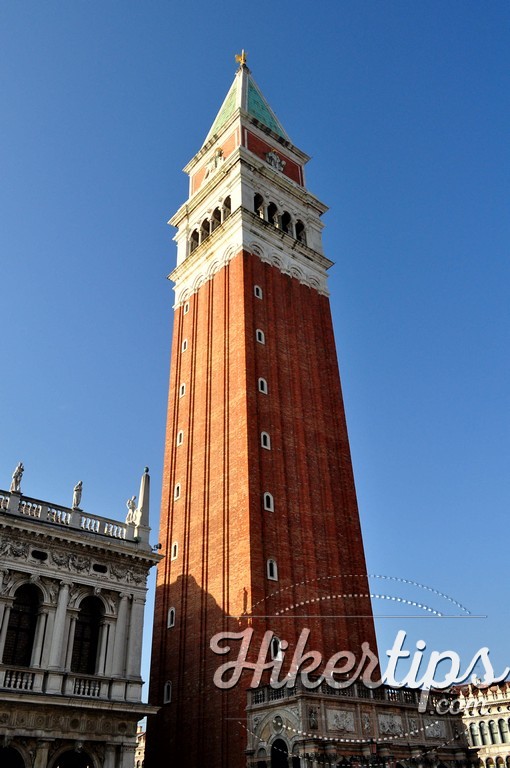 Unlike other bell towers, this one offers its tourists the possibility of reaching the lodge by elevator. An interesting detail is the lovely gilded statue of Archangel Gabriel which is situated right on top of the tower.

5.The Bridge of Sighs (Ponte dei Sospiri), another charming tourist attraction is actually a part of the Doge’s Palace. Connecting the New Prison with the interrogation rooms, this enclosed bridge can be crossed only if you choose to visit the interior of the palace. The exterior of the bridge can be admired from Ponte della Paglia, which is situated very close to the entrance of the Doge’s Palace. 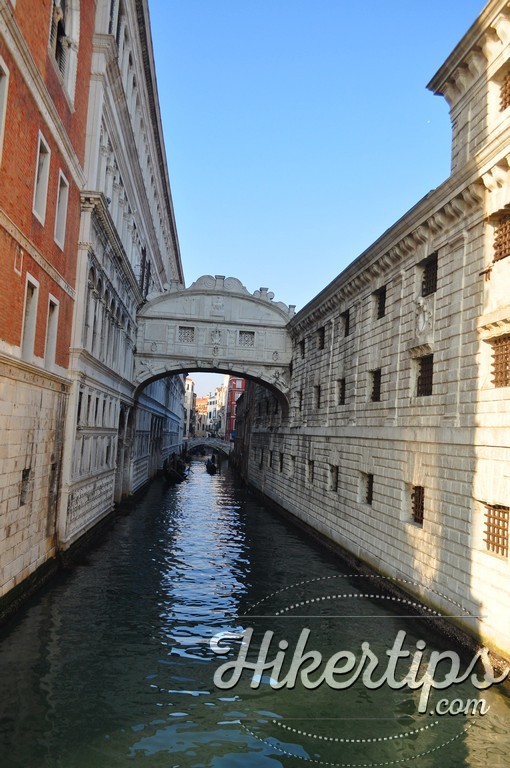 Designed by Antonio Contino, the bridge is made of limestone and it is decorated with a few small windows. It is said that the view offered by these windows was the last image of Venice seen by the convicts before they were incarcerated.

I must confess that the feeling you get when you cross this bridge is really strange and unusual and probably because of this harsh reality.

However, there is another local legend which says that if you kiss your loved one under this bridge at sunset, eternal love is granted.

6.One of my favorite places in Venice is Punta della Dogana which is a triangular area where the Grand Canal meets the Giudecca Canal. Situated in the district of Dorsoduro, this piece of land connects the two canals but it’s also the home of a few famous buildings. The lovely Basilica Santa Maria della Salute, the Patriarchal Seminary of Venice and the art museum Dogana da Mar are all situated in this area, which seems to be a small peninsula in the middle of the city. 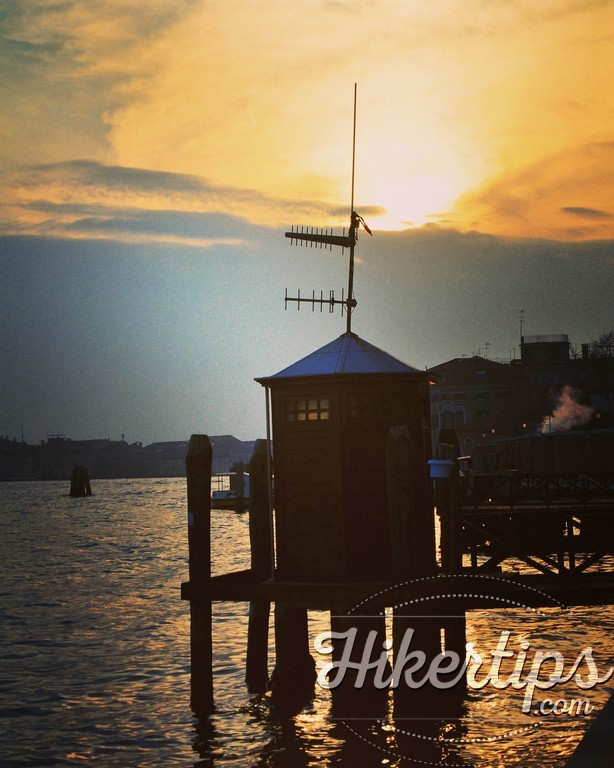 What I really liked about this place was the fact that I had the opportunity to admire a few lovely views and a beautiful sunset.

7.Located on Punta della Dogana, Basilica Santa Maria della Salute is one of the most representative churches in Venice. Also called La Salute, this Roman Catholic Church is one of the most recent churches built to commemorate the victims of the plague. As the name suggests, it was symbolically dedicated to the Lady of Health. 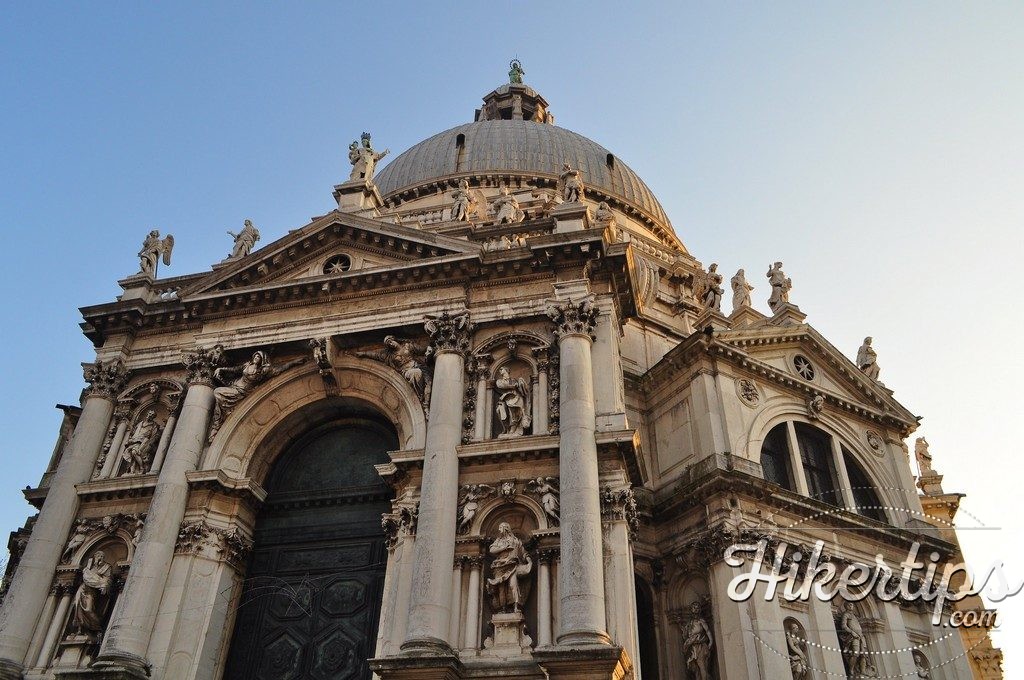 Designed by Baldassare Longhena in a Baroque style, the imposing exterior of this building is dominated by the presence of a dome, which seems to guard the skyline of Venice. An interesting collection of art objects is waiting to be admired inside this church.

8.Rialto Market (Mercati di Rialto) is considered the commercial heart of Venice. This is a market where the tourists can enjoy the freshness of fruit, vegetables, fish and a variety of spices. 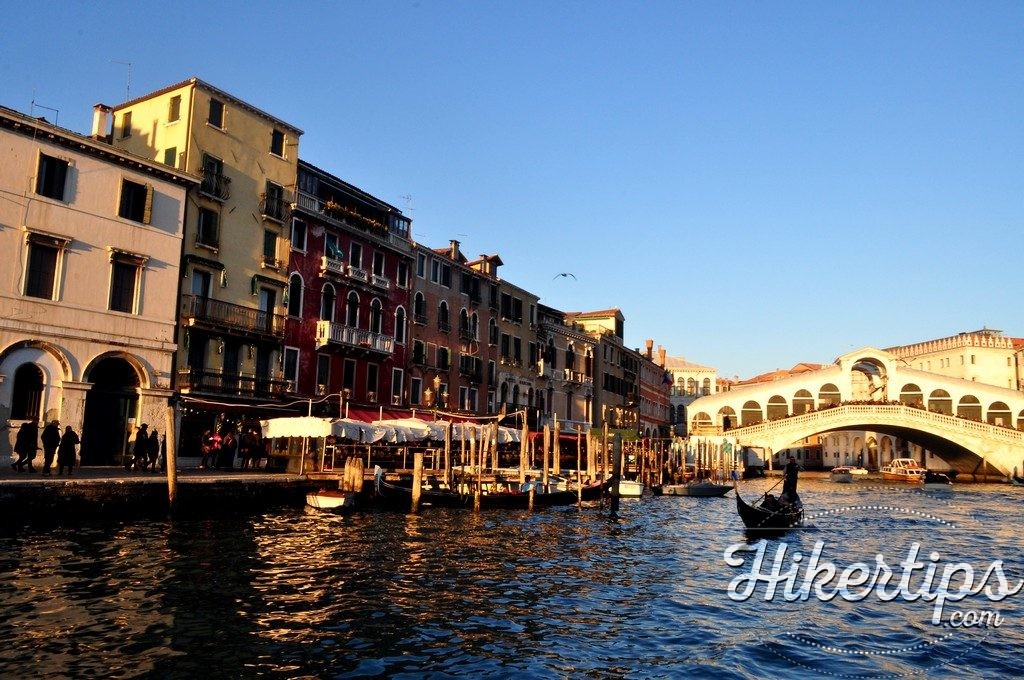 Situated very close to the famous Rialto Bridge, along the Grand Canal, this market is in my opinion one of the places which perfectly portrays the Venetian vibe.

Besides all the goods that can be bought from this market, an interesting aspect is the fact that this is a place from where you can admire amazing views.

9.The Church of San Simeon Piccolo (Chiesa di San Simeone Piccolo) is one of the first buildings I’ve seen from the famous vaporetto.Situated in the district of Santa Croce, the church seems to be small and simple at first sight. Designed by Giovanni Antonio Scalfarotto in a simple neoclassical style, the only elements that stand out about this church are the four columns and the green dome which embellish the façade. 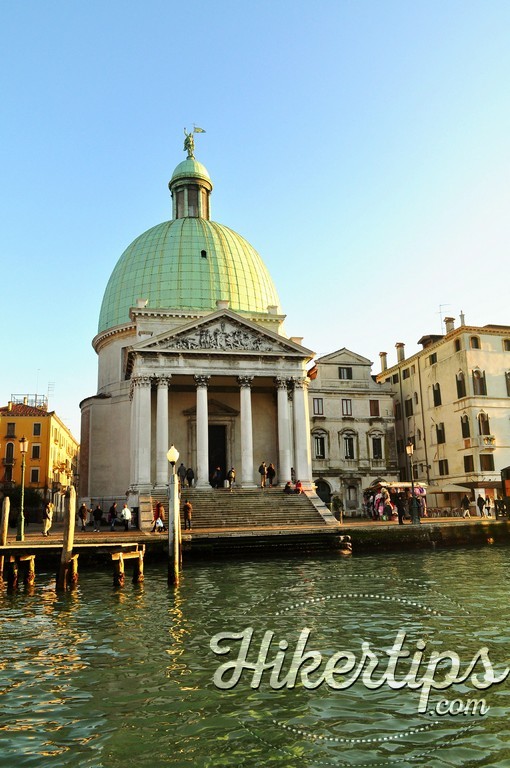 Even though I admired this church only when I used the vaporetto to get to different destinations, I must admit that this church is one of the buildings that quickly come to my mind when I think about Venice.

10.Last but not least, the Church of San Geremia (Chiesa di San Geremia) is considered one of the most valuable churches in Venice because it shelters St. Lucy’s of Syracuse grave (Santa Lucia di Siracusa). 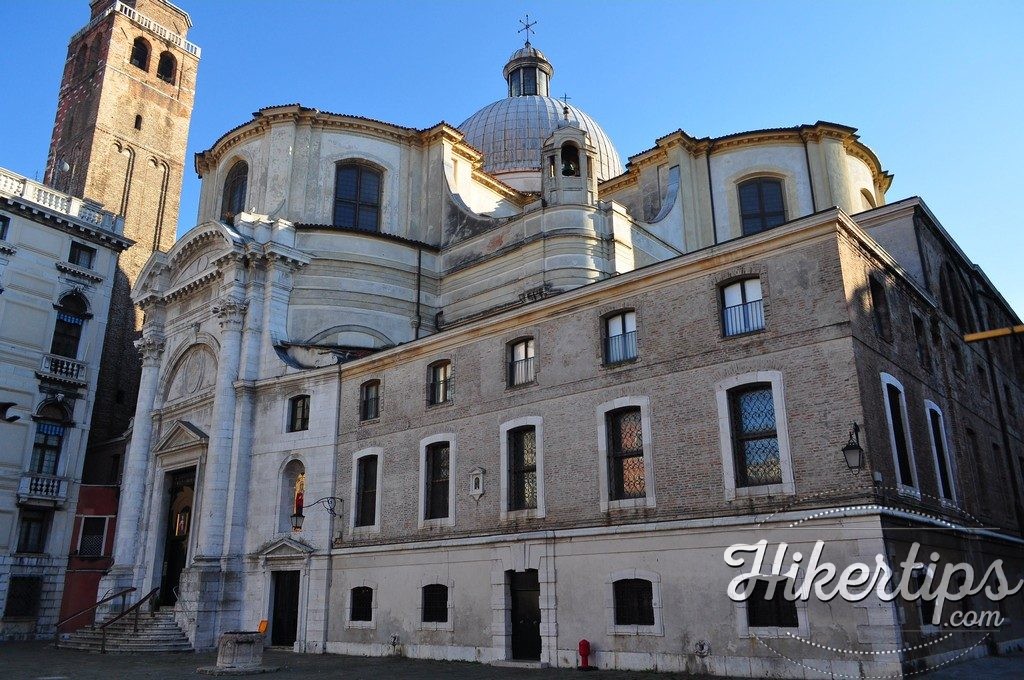 Situated in the district of Cannaregio, in San Geremia Square, this church is visited annually by a lot of pilgrims, who are eager to worship Saint Lucy of Syracuse, who was considered a martyr during the Diocletian Persecution.

The church was designed by Carlo Corbellini and it displays a simple white exterior. As the name suggests, the Church of San Geremia is also dedicated to San Geremia.

These are my favorite places in Venice, but this city has a lot more to offer and I’m sure you might find other places as beautiful as these ones. Regardless of the places you consider your favorites the undeniable truth is that Venice is simply charming.

The City of Luxembourg, a modern and cosmopolitan...

The Clay Castle seems to be cut out...

Spend a great day at Madame Tussauds in...