I have already been to Alsace three times and I must confess that I would visit this place over and over again. During my visits there, the beauty of that French area impressed me a lot. My first visit to Alsace happened when I visited Strasbourg a few years ago. This amazing town made me feel a strong desire to discover the beauty of this picturesque area. This is why in the last years I visited the area of Alsace again, but this time I chose to see Colmar and the surrounding villages. This part of France looks like a piece of paradise, with fairytale villages embellished with half-timbered houses and colorful flowers. 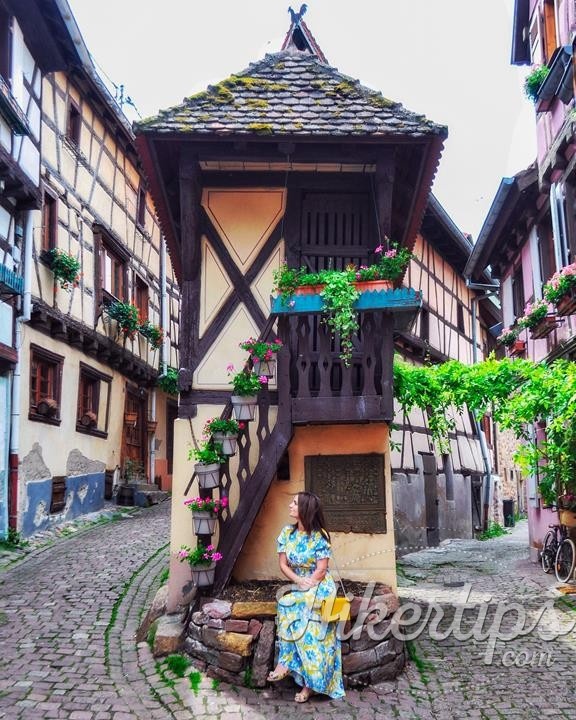 I really enjoyed my visits there and this is why I would like to recommend three places in case you ever get to this part of France:

1.Colmar is one of the most famous and beautiful towns in Alsace. Also called “The Little Venice of Alsace”, this town fascinated me with its interesting canal-side neighborhoods, cobblestone streets, half-timbered houses and amazing landscapes.

The Old Town of Colmar is a maze of narrow cobbled streets where you can admire a multitude of colorful half-timbered houses that are perfectly aligned. The lively atmosphere of the Old Town is animated by the multitude of restaurants and terraces, bakeries and ice cream shops. This well-preserved historic area lies between Rue des Têtes, Rue des Clefs and Rue des Marchands, very close to the Place de la Cathédrale. Also known as the heart of Colmar, the Place de la Cathedrale offers you the chance to admire the gorgeous Eglise Saint-Martin (Saint Martin’s Collegiate Church) which is an authentic example of Gothic architectural style.

L’Ancien Corps de Garde (The Former Guard House) is another important historic monument situated in La Place de la Cathédrale. Down the centuries this edifice was used as a marketplace building, a justice hall and as a military house. Walking down the narrow streets of Colmar you will have the chance to admire La Maison Adolph, which is the town’s oldest surviving private house. Another stop should be in the front of L’Eglise Saint-Matthieu, a 13th-century beautiful Protestant church. 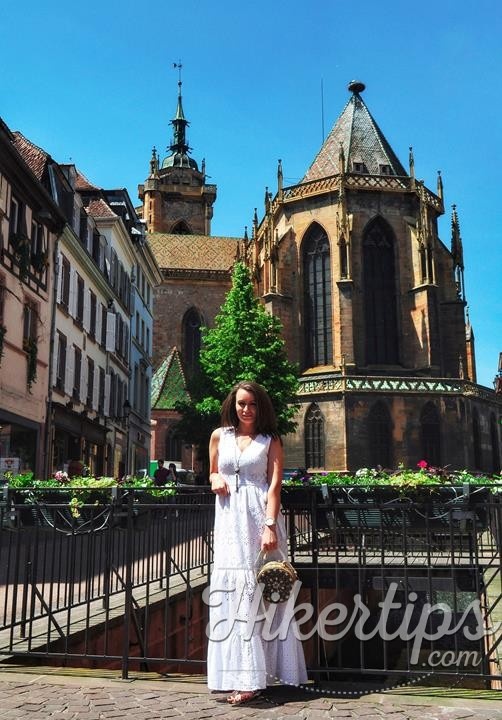 When it comes to beautiful houses, La Maison Pfister is another great example. This house has a unique appearance that combines the medieval and the Renaissance architectural styles. You could also visit the Bartholdi Museum, which is situated in Rue des Merchands. This museum was built in honor of the French sculptor Auguste Bartholdi and it displays a lot of objects that belonged to him. If you want to admire some gorgeous picturesque half-timbered houses, Rue des Boulangers and Rue des Serruriers are the perfect choices. You should also take your time to enjoy the beauty of La Maison des Têtes, a Renaissance building with an interesting façade decorated with small busts and human figures.

In case you like museums, you could visit the Unterlinden Museum, where you can admire a collection of Romanesque and Gothic sculptures, medieval paintings, folk art exhibits and crafts. L’Eglise des Dominicains (the Dominican Church) is another excellent example of the gorgeous Gothic architecture which offers an insight into the lives of the Dominican preachers.

Le Quartier de la Krutenau (Little Venice) is my favorite part of Colmar. This neighborhood is blessed with canal-side restaurants, pedestrian bridges and colorful half-timbered houses. This lovely part of town is embellished by lush greenery and willow trees that border the canals and by a multitude of flower pots that decorate the small houses. Not to mention the small boats which float along the narrow canals. 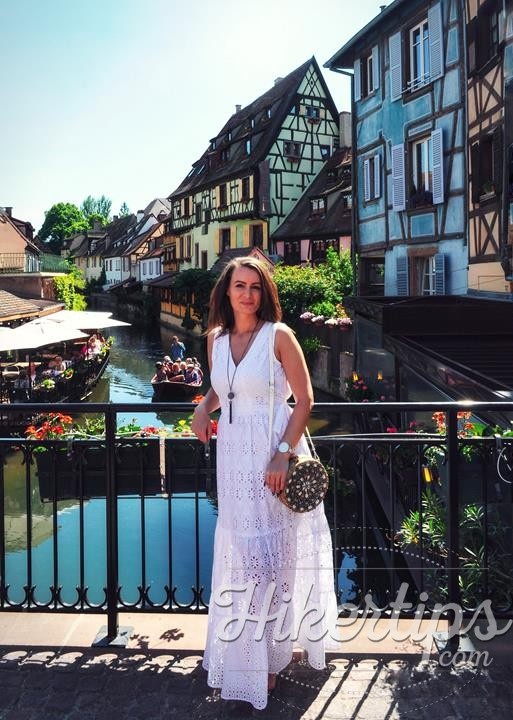 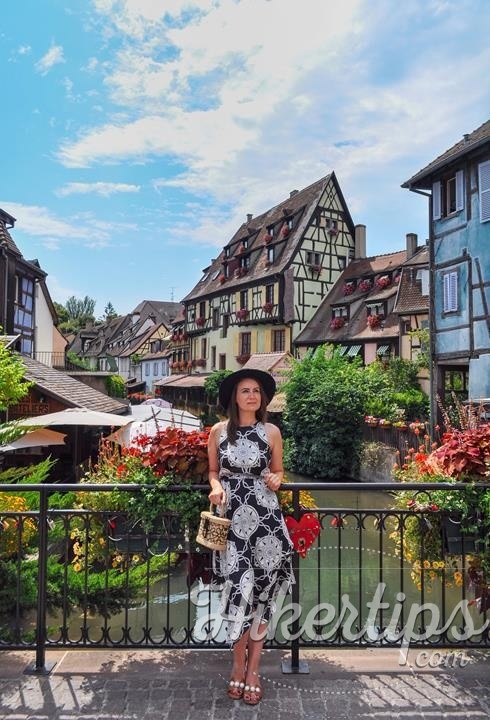 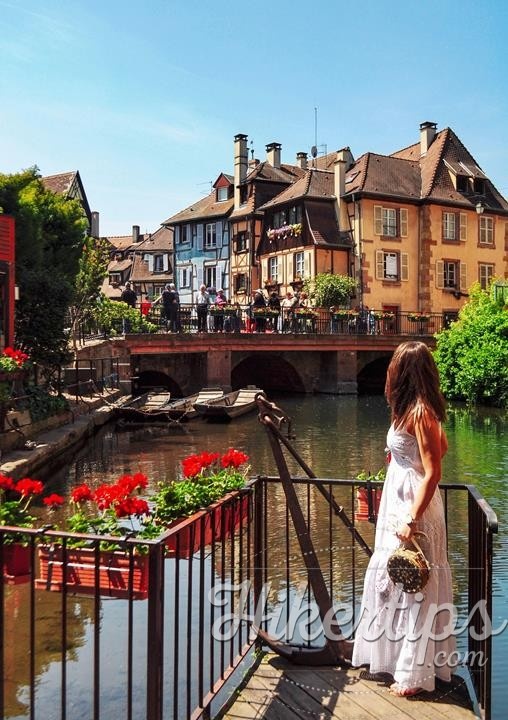 Le Quartier des Tanneurs (the Tanners’ Quarter) is another beautiful neighborhood in Colmar with picturesque canals and wonderfully restored half-timbered houses. Besides admiring the beautiful houses, you can take a walk in the lively Market Hall and admire the architecture of the Palais de Justice (The Palace of Justice) and the unique architectural style of L’Hôtel des Chevaliers de St-Jean (House of St. John’s Knights). Between Le Quartier des Tanneurs and Le Quartier de la Krutenau, you can take a walk in another idyllic quarter where you can admire some of the most beautiful half-timbered houses. 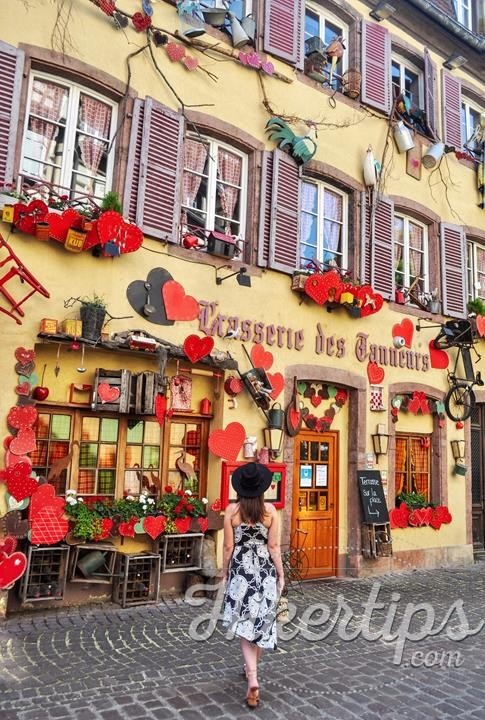 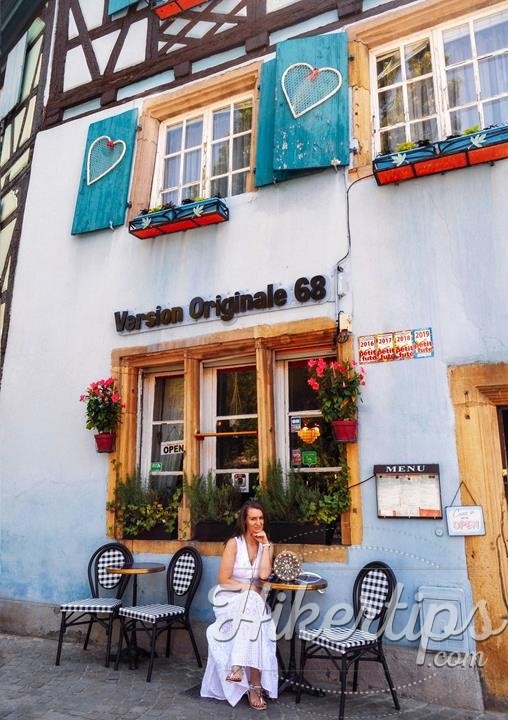 As you have probably realized, there are a lot of places you can admire in Colmar and this small town is worth your attention. 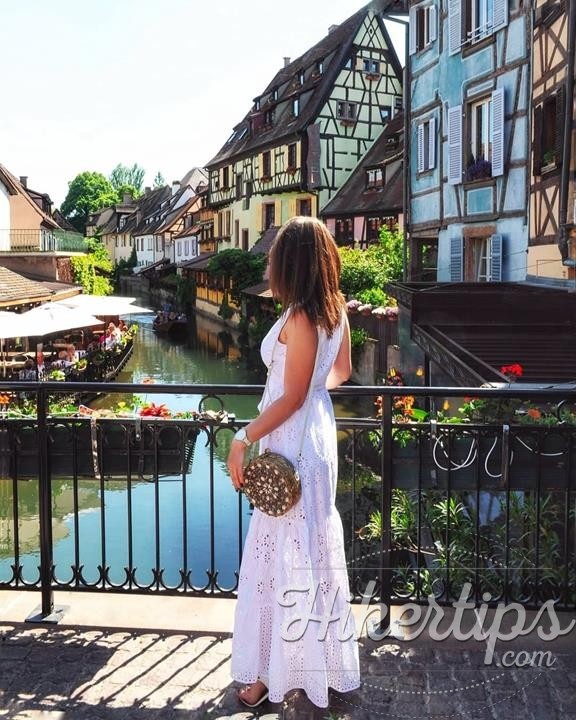 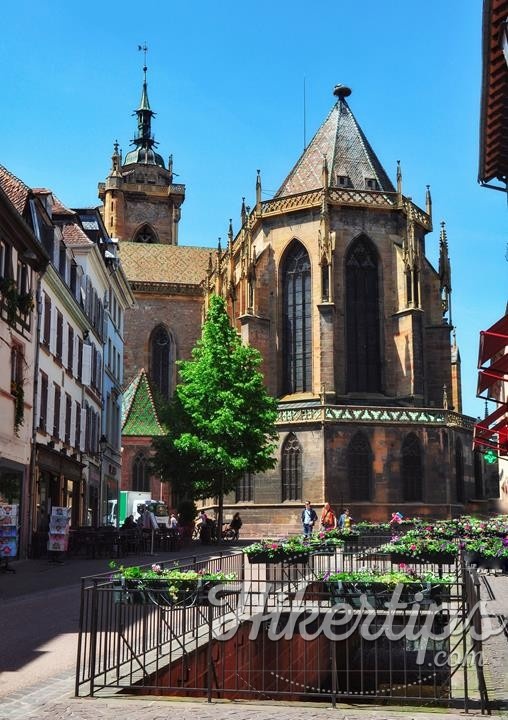 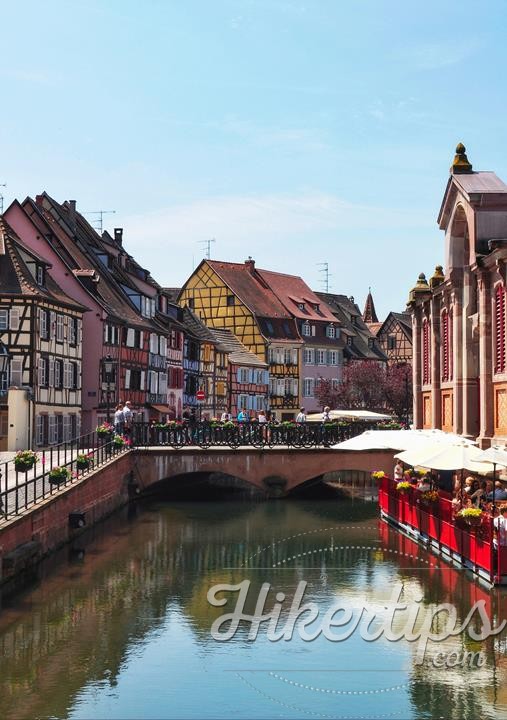 2.Situated 10 kilometers away from Colmar, Riquewihr is one of the most famous and beautiful villages in France. Built in the shape of a square and surrounded by large vineyards, this small village seems to be cut out of a fairytale. Hidden between the peaks of the Vosges Mountains and the Plain of Alsace, the medieval village of Riquewihr fascinated me with its picturesque architecture and its famous wine specialties. 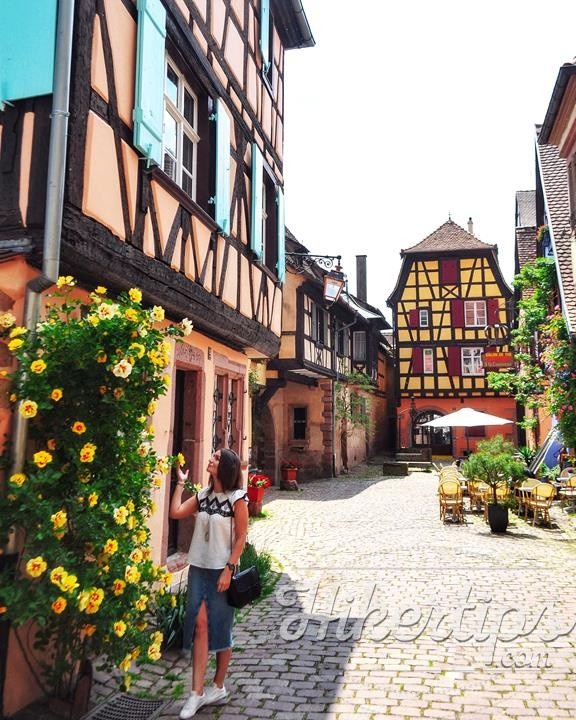 The Gem of the Alsace Vineyards, as it is called, gained its notoriety thanks to its world-famous varieties of wine. The lovely half-timbered houses, the friendly locals, the lively atmosphere, the tempting shops and the appetizing restaurants, bakeries and coffee shops are a real treat for tourists.

Walking down Rue du Général-de-Gaulle, which is the main street of the village, you will have the chance to admire some beautiful historic monuments. The Dolder Tower, which is a former defensive gateway that dates from the 13th century and houses a museum, deserves a few minutes of your time. The Winemaker’s House, which dates from the 16th century, is also an important tourist attraction in Riquewihr. The Thieves’ Tower, the former prison of the village, is another tourist attraction which will impress you.

I must confess that this small village was a real surprise for me. It was a delight to walk in its narrow cobblestone streets embellished with a multitude of flowers and admire the colorful buildings and the public squares adorned with fountains. The Flowering Village, the way Riquewihr is called, should be on your trip list in case you ever get to Alsace.

3. Eguisheim is a small and picturesque village which impressed me. Considered a French jewel, Eguisheim gained the title of the most beautiful village in France and for good reason. The beautiful narrow cobblestone streets, the rustic fountains and the brightly-painted half-timbered houses with balconies and windows full of flowers create the fairytale setting of this village. 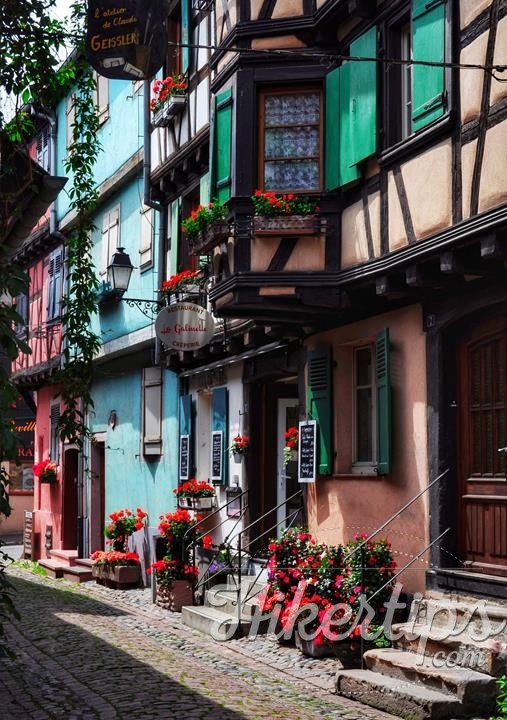 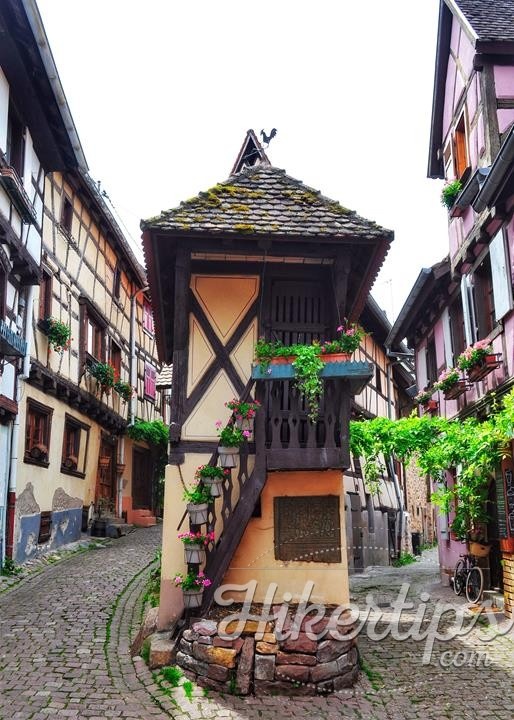 Situated 5 kilometers away from Colmar and surrounded by large vineyards, Eguisheim is known as the birthplace of the Alsatian vineyards. The streets of Eguisheim look like three concentric circles situated around the central castle. La Grand-Rue, which is the main street in Eguisheim crosses the village from East to West. 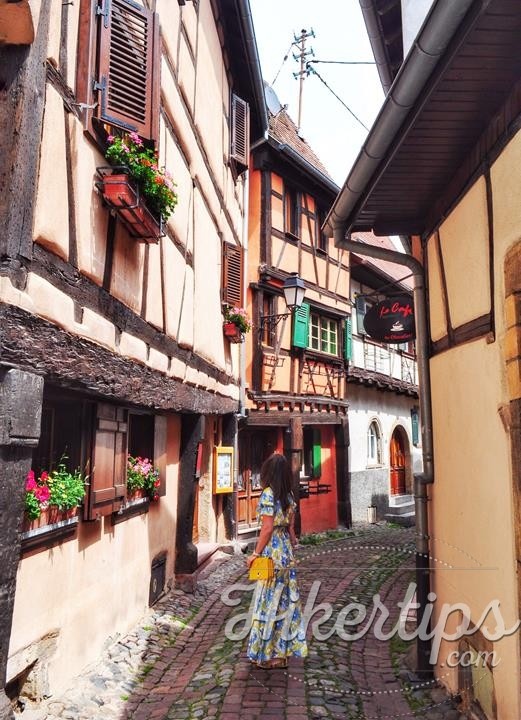 Palace du Château Saint-Leon is the main square of the village which shelters St. Leon Fountain, an atypical octagonal fountain. Atop this fountain, you can admire the statue of Pope Leon IX. According to the legend, Pope Leon IX also known by the name of Bruno of Eguisheim-Dagsbourg is the former bishop of Toul who was born in Eguisheim. St. Leon Castle or the Château-Bas d’Eguisheim, whose ruins can still be visited, lies in the middle of the square. It is also very interesting to visit St. Leon Chapel, the place where the relics of Pope St. Leon IX are kept. 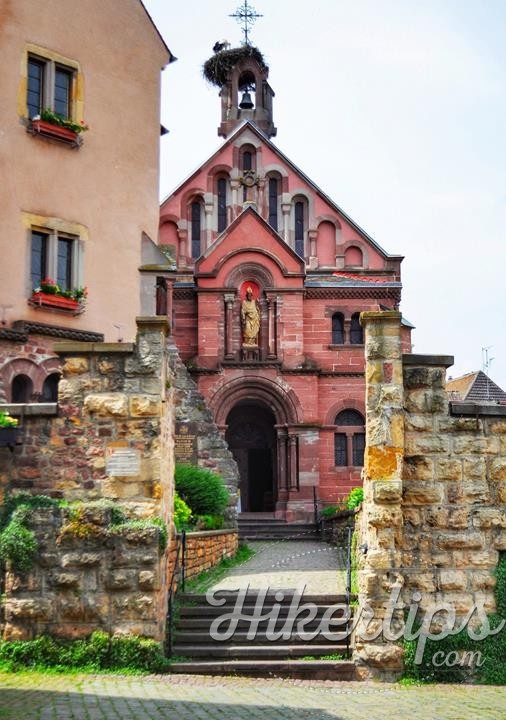 As I have already said, the entire village is built around this castle and it is practically impossible to miss it. St. Peter Church and St. Paul Church are other two religious edifices that are very important pieces in the history of Eguisheim. A walk in the picturesque streets of Eguisheim will offer you the chance to experience its real charm. 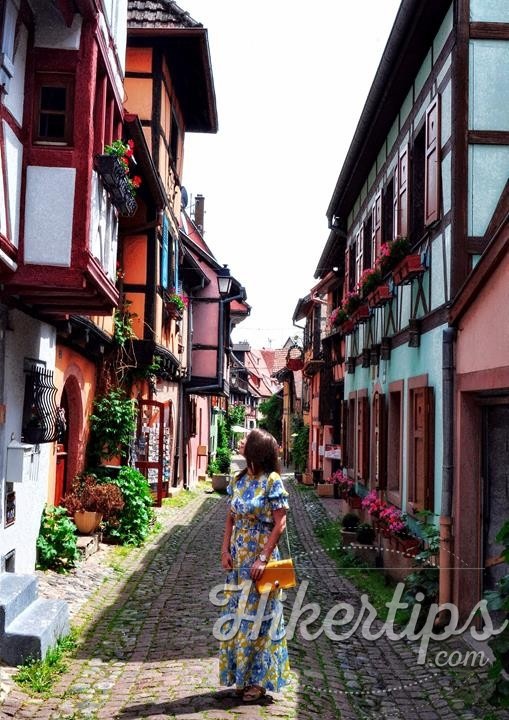 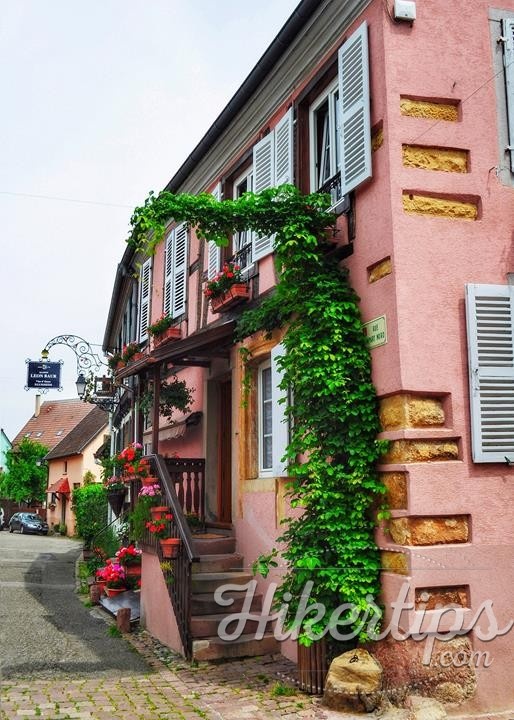 In case you want to visit the entire village, my advice is to start from Rue du Rempart-Sud and continue until you get to Rue du Rempart-Nord. Among the interesting courtyards that you will discover along this walk, you will be impressed by the yellowish facade of Unterlinden Court or Catharinenhof. Even though this village is considered an open-air museum, my favorite building remains a little house which lies at the intersection of two cobblestone narrow streets. I took a lot of pictures there and there is no doubt that it is one of the most photographed places in Eguisheim. 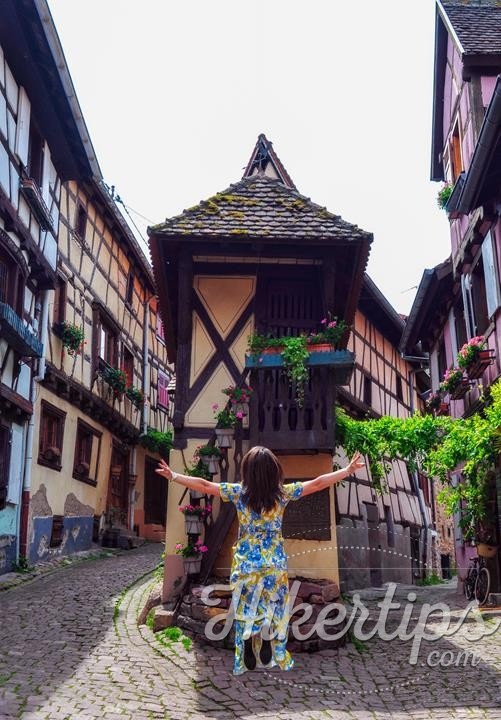 To sum up, make sure you add these three places to your trip itinerary in case you plan a visit to Alsace. They are really beautiful and visiting them won’t be a waste of time.

5 beautiful places you could visit on the Island of Gozo

Doa Ninine, a welcoming place to stay in...