I must confess that I added Pisa to my list from the moment I saw the first picture of its famous leaning tower. The image of the tower had a great impact on me and I really wanted to see it with my own eyes.

This year, I have finally managed to fulfill my wish and to my great surprise, the square which hosts this tower has a lot more to offer. I am talking about the lovely Square of Miracles (Piazza dei Miracoli), a 9 hectare square surrounded by stone walls. 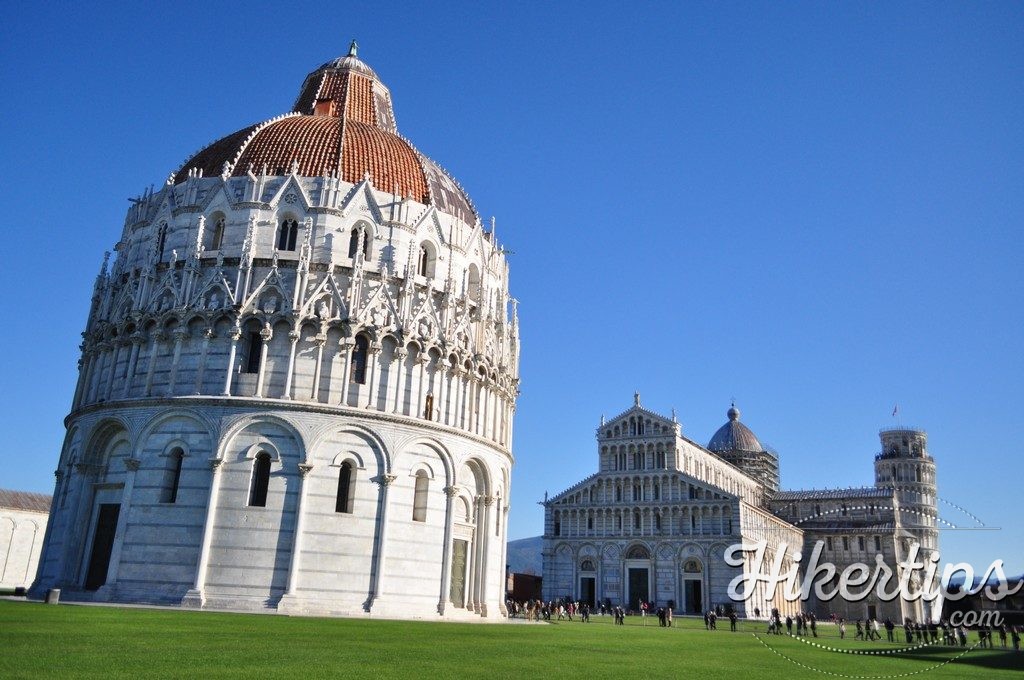 Also known as Piazza del Duomo or the Field of Miracles, this place is considered one of the finest architectural complexes in the world. This piece of land shelters the famous Leaning Tower of Pisa, the Cathedral of Pisa, the Baptistery, the Camposanto and a couple of museums. 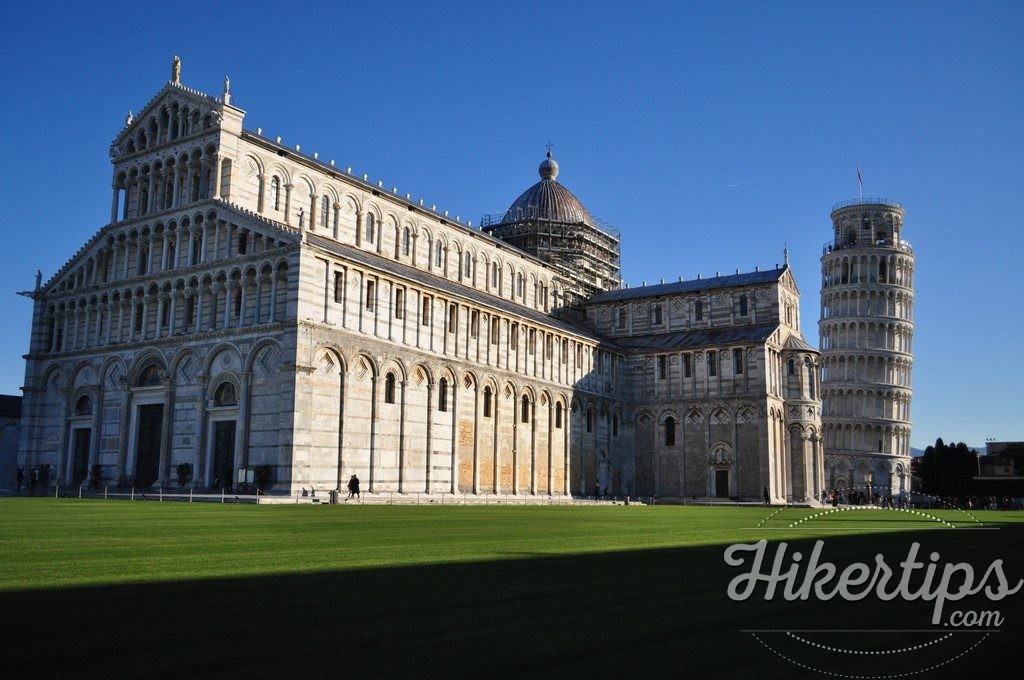 As soon as I reached the square the imposing presence of the tower caught my attention, but I quickly realized that I had an entire complex in front of my eyes. The truth is that the beauty of the Square of Miracles is given by the four religious edifices that I have mentioned before. All of them follow the rules of the same unique architectural style which is the innovative Pisan Romanesque style. 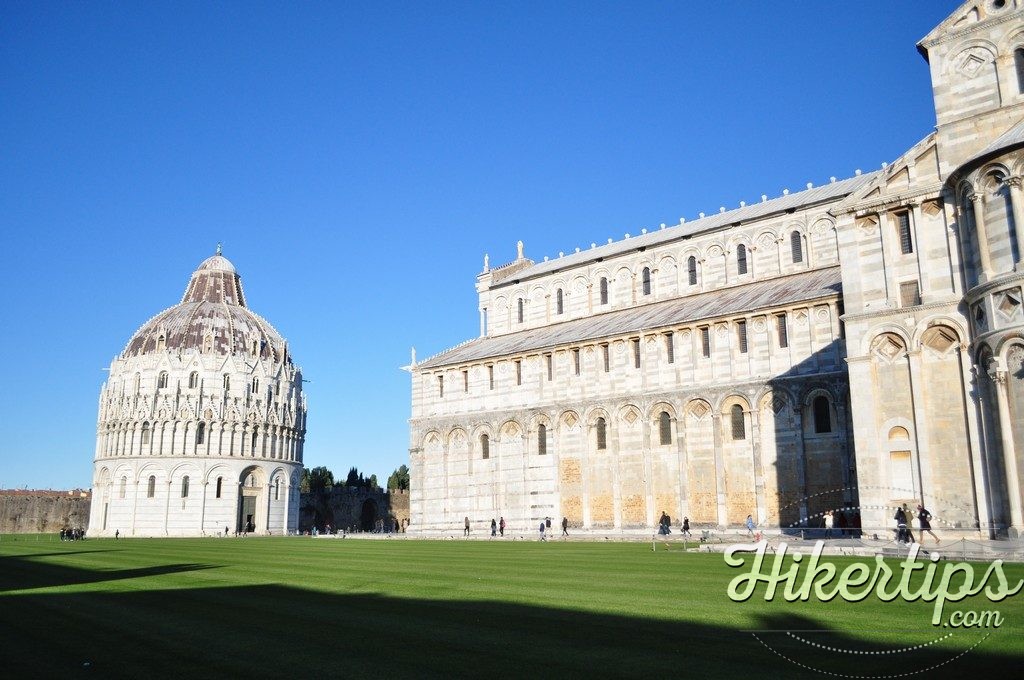 As I have already said, the Leaning Tower is the most famous building in the entire complex and also the symbol of Pisa. The Campanile, as it is called, is the bell tower of the Cathedral of Pisa. 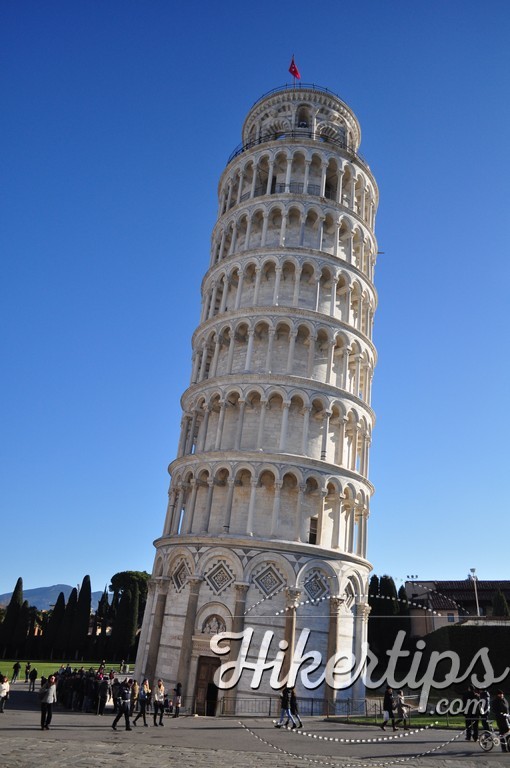 Besides its distinctive architectural style, another interesting aspect about this cylindrical tower is the fact that it’s a bit tilted. This is, in my opinion, one of the reasons for its increased popularity.

The construction of this 60 meter tall tower was a hard and elaborate process which lasted a few decades. Added just before the construction process ended, the belfry has seven bells, each of them with its own name. 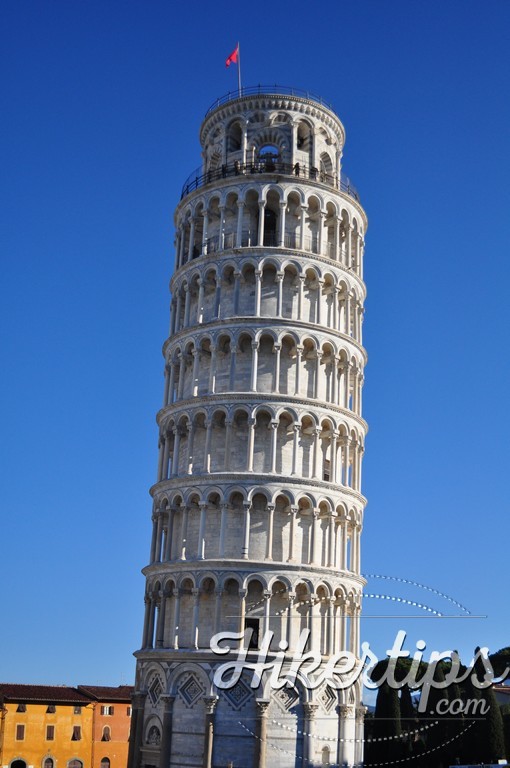 You should know that you can reach the top of the Leaning Tower, in case you want to admire a spectacular view over the entire city.

The heart of the square is dominated by the presence of the medieval Cathedral of Pisa, which was dedicated to Santa Maria Assunta. The cathedral is a real example of simplicity perfectly mixed with a few elaborate exterior decorations. These architectural details carved in marble, make the entire building unique in the world. 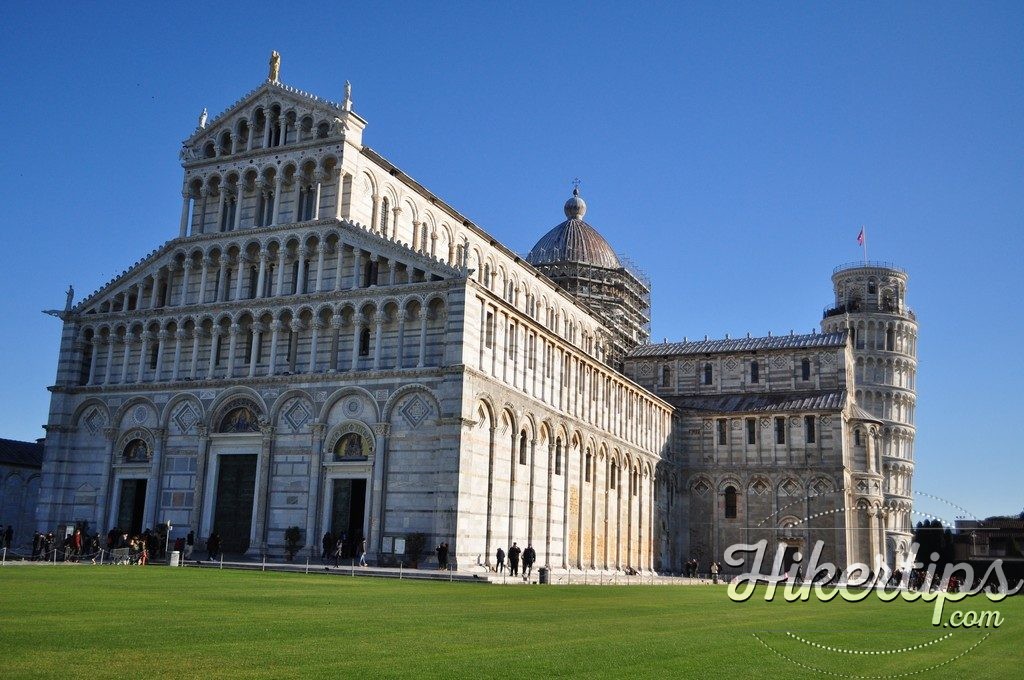 Made of grey marble and white stone, the façade of the cathedral is embellished with a few massive bronze doors. In my opinion, Buscheto, who was the architect of the cathedral managed to build an edifice which is so simple, yet so complex. 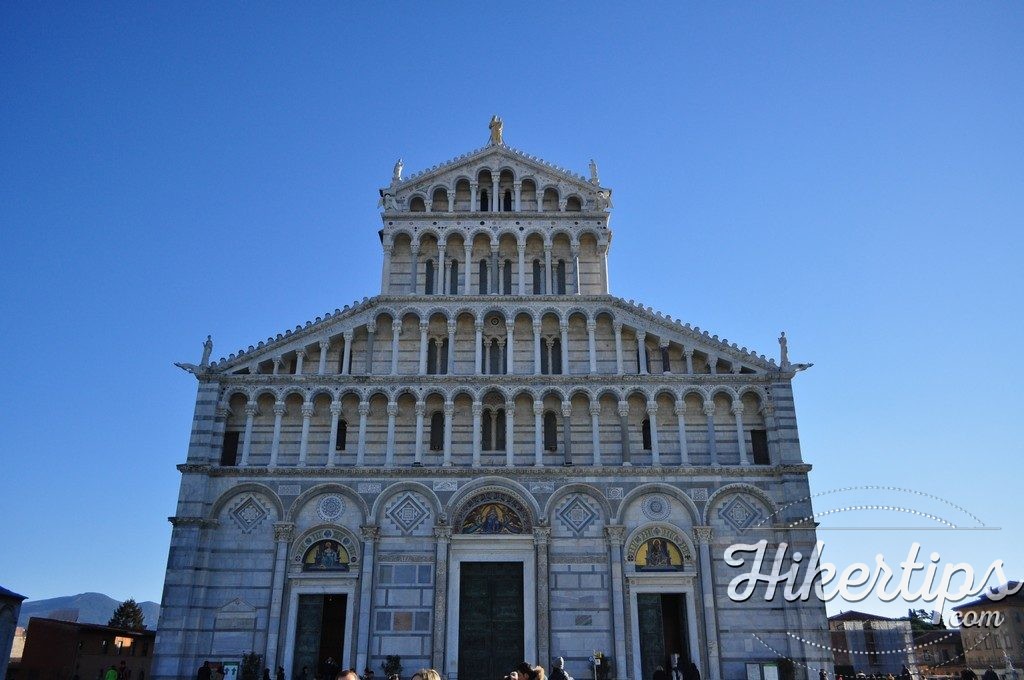 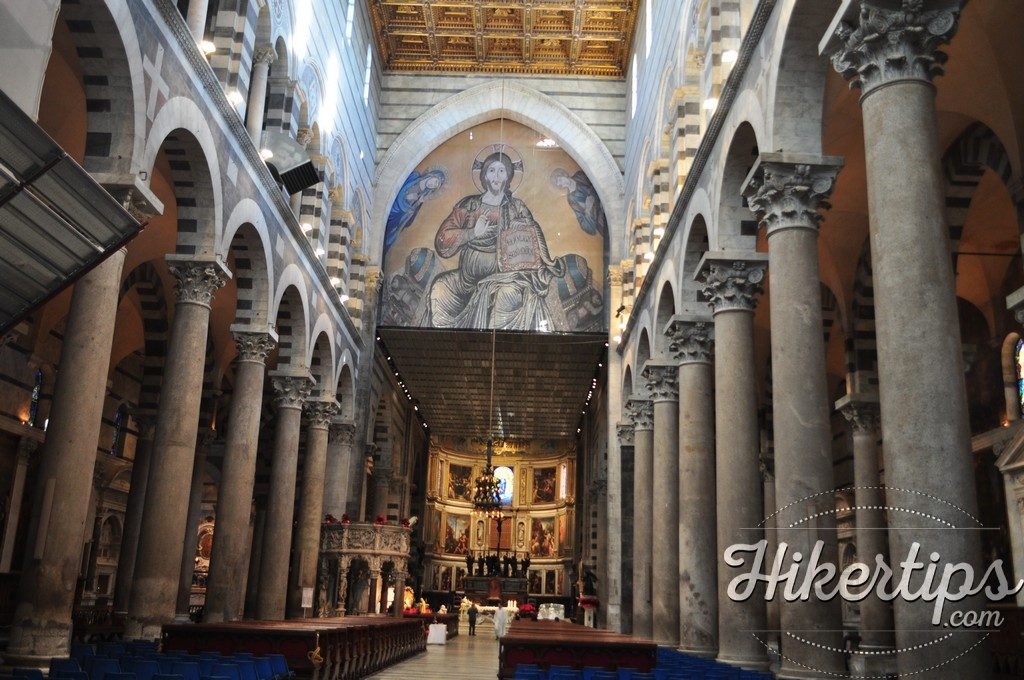 Located very close to the cathedral, the Baptistery rises majestically in the lovely square.  Dedicated to St. John the Baptist, this religious edifice combines the same Pisan Romanesque style with a few Gothic elements. 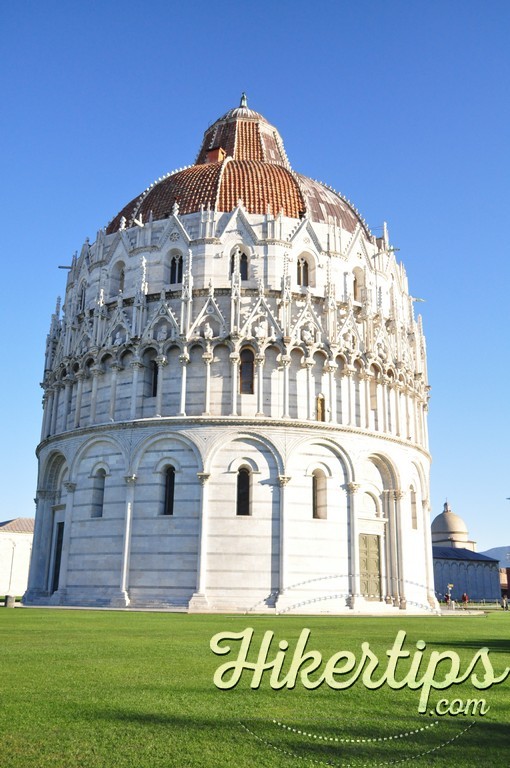 Designed by Diotisalvi, it is considered the largest baptistery in Italy. An interesting detail is the fact that the name of its architect means God saves you in Italian.

Last but not least, the Camposanto is a walled ancient cemetery situated at the north end of the square. The construction of this cemetery was initiated by the architect Giovanni di Simeone, but it was not completed by him.

The Graveyard, as it is called, is bordered by an interesting fence of marble which, in my opinion, gives a certain value to the entire complex.

Even though the Leaning Tower is the iconic image of Pisa, I have to admit that after my visit there I have changed my perception a little. The beauty of Pisa is definitely portrayed by the entire Square of Miracles and I’m sure you’ll think the same if you ever visit Pisa.

The spectacular Balos Beach in pictures